Before & After: A Lighter, Brighter Southwestern Home

Territorial architecture and the Southwest go together like deserts and sunsets. But for one partially retired couple in Phantom Hills, AZ, the syle of their mountainside home felt more dated than charming.

The couple enlisted Ernesto Garcia, an award-winning interior designer based in Phoenix, to update the kitchen and bathroom, which hadn’t been touched since the mid- to late 1970s.

Here’s a look at how Garcia transformed the home.

“[The homeowner] said she wanted to feel like Doris Day in her kitchen every morning,” Garcia recalls. “She wanted something happy.” Her husband, a gourmet cook, wanted ample space for preparing meals.

The couple’s other requests included a large bar to entertain friends, and a breakfast nook for informal dinners.

Remodeling the space to suit their needs posed an interesting challenge. Because most territorial homes tend to feature what Garcia calls a “fan floor plan,” the rooms end up being narrow and curved. Garcia says these homes give you access to vast views, but they require a certain skill set to use the space wisely.

“My approach was to respect the curves,” he explains.

He added the clever ensemble of island, bar, and cocktail table to follow the flow of the home. “It makes the space’s circulation and its functions a lot more efficient,” Garcia says. 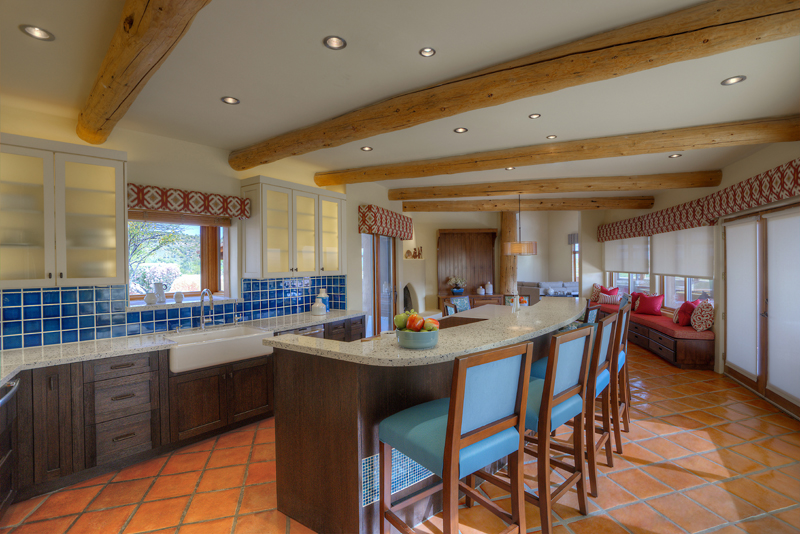 After: A curved island and bright colors bring functionality and style to the kitchen.The designer also aimed to pay homage to the home’s Southwestern roots. Garcia says that the custom-built window seat not only highlights the striking view, but also features Navajo-woven fabric from the 1920s.

“The pillows pick up the various reds in the Navajo fabric, while the cabinets, made of knotty alder wood, create a harmonious dialogue between the existing architecture and the materials,” he notes.

Garcia, who worked on the project for nearly six months, says the clients wished to keep the fireplace and beams, which made sense, given the latter’s radial layout.

“Everything conveys movement,” he says. “I liken it to the waves of a tide.”

For the bathroom, the biggest priority was to bring in more light and make use of the narrow, curved space.

Out went the old Jacuzzi with its bulky brick base, and in went an oval-shaped tub with contemporary fixtures. A panel of frosted glass was placed in the wall behind it, allowing light from the vanity windows to stream in.

In the small shower, Garcia placed subway tiles in an unconventional vertical pattern to get around the tight curves.

The vanity, meanwhile, got a facelift with new mirrors and face-level light fixtures.

Garcia is particularly proud of the rift-oak vanities, which he chose for their smoky gray finish.

“Here in the desert, wood will often turn that beautiful color if it’s left out to dry in the sun,” he explains.

Inspired by Garcia’s Southwestern design? Here’s how to pull off the look in your own home.