Do's and Don'ts of Summer Landscaping

Whether you’re dealing with California droughts, Midwest heat waves or Deep South downpours, summer can be a tricky time to garden. Here’s what you need to know before leaving air-conditioned comforts for a steamy backyard jungle.

Generally speaking, it’s a bad idea to attempt veggies like peas, lettuce, carrots and radishes in summer. They will quickly bolt in the heat, meaning they’ll devote their energy to blooming and producing seeds, making the edible parts bitter.

Take advantage of summer’s sunshine by planting these heat-loving edibles:

It’s tempting to set the sprinklers on a timer, kick up your feet and consider it handled. But you don’t want to run sprinklers in a rainstorm, so water plants only when they’re newly planted or wilting and/or dropping leaves.

DO: Use drought-tolerant plants

That said, drought-tolerant does not mean you can plant it and forget it. Keep the soil moist until the plant takes off on its own.

DON’T: Turn your back on the garden

Because in summer, things can change in a heartbeat. Plants can succumb to pests, drought, wet soil or rot in a matter of days. Pay attention to weather forecasts, and watch for struggling plants.

Use those pruners on any bullies that seem to be taking over less vigorous plants. When in doubt, rip it out. 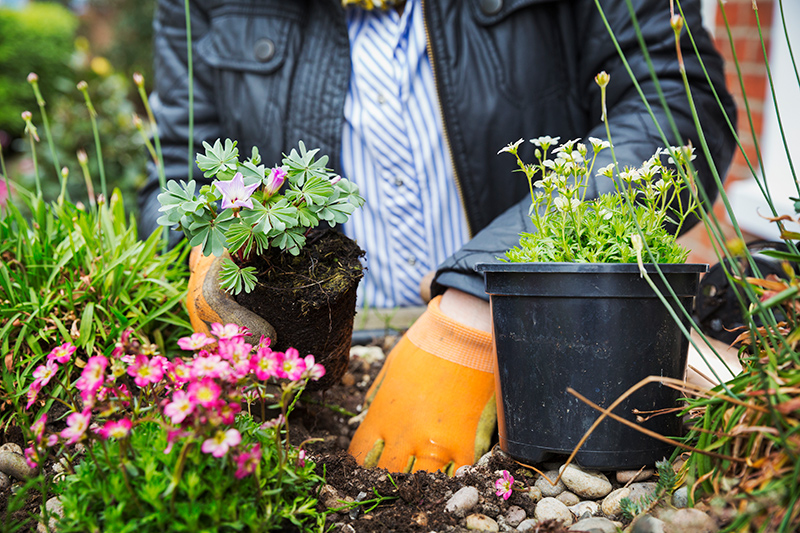 Water like you really mean it, with a deep soak so that the water penetrates the soil without running off or evaporating in the summer heat. Watering deeply will also encourage deeper root growth, which helps plants (especially shrubs and trees) stay healthier and more drought-tolerant in the long run.

Water in the root zone with a garden nozzle, a soaker hose, or just a hose and a full stream of water.

If you plan on turning your summer lawn into a putting green and you mow your lawn close, you’ll be sorely disappointed by the results. (Unless you’re willing to settle for a putting brown, that is.) Shortcuts mean less drought-tolerance, patchier growth, more weeds and shallow roots. When in doubt, cut high.

Give your lawn a pick-me-up to cope with the summer heat. Your local garden center should have a good selection of fertilizers to suit your region and/or lawn type. Fertilize according to label instructions, using a broadcast spreader, handheld spreader or drop spreader for even coverage. Generally speaking, don’t feed on a hot day with temps above 90 degrees.

DON’T: Water in the afternoon

While it’s a myth that water droplets can magnify sunlight and burn the plants, watering in the hottest part of the day is still useless. Water quickly evaporates in summer, and many plants will go semi-dormant. Water in the early morning so the plants’ roots have a chance to absorb moisture.

Procrastinate all you want, but pull those weeds before they have a chance to bloom and go to seed, spreading their progeny all over your garden. Don’t settle for hand-pulling everything either. Use a hoe or cultivator for new weeds in loose soil, or a heavy-duty weeding tool, like a hori-hori knife, hook or mattock for tough, established weeds.

Much of your garden will slow down in the heat of summer, but tropical bulbs such as caladiums, elephant ears, cannas and gingers will only grow faster. Create a lush and jungly understory beneath shady trees by planting en masse, or use sparsely for architectural interest in container combos and flower beds.

Photos from Shutterstock and Offset.

The post Do’s and Don’ts of Summer Landscaping appeared first on Zillow Porchlight.