Only one thing really mattered to the young family who tapped Urban Dwellings, a New England design firm, to upgrade their late-1960s ranch house: killer views of the water.

“They were living in a house that was very dated, and views were blocked at all possible points,” recalls founder and lead designer Tracy Davis, who spent eight months on the project. The goal was to bring the view inside and make the Cumberland, ME home feel more modern.

The sprawling two-story property, which sits on an inlet, had great “bones” to start with, but the exterior and interior needed an overhaul. “We replaced almost all of the doors and windows,” Davis says, and they expanded several small rooms as well.

With the aim of bringing the outdoors in as much as possible, the living room now features two doors that slide open, allowing people to survey the view from the wraparound deck. 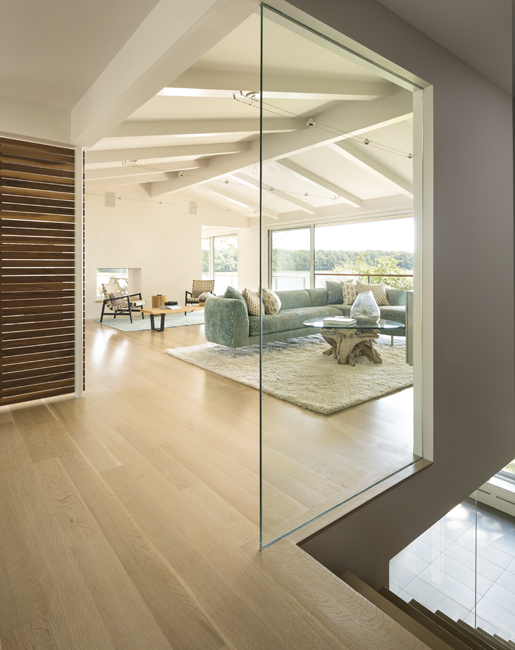 Beneath the deck, the team added a covered area for rainproof entry into the home. Just beyond is a guest bedroom with an en suite bath and media room. And around the corner, one floor under the kitchen, another covered area beckons people to eat by the pool looking onto the water. 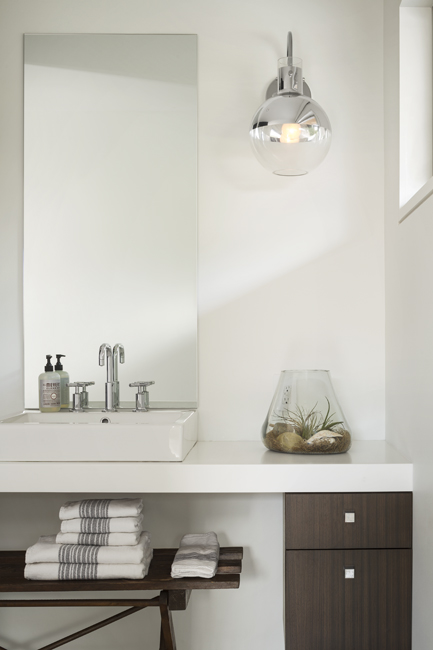 The home’s exterior, with its clean horizontal lines, is decidedly of the moment, and there’s no denying the appeal of the wide-open kitchen. Fully remodeled, from the baseboards to stainless steel appliances, it features a sizable island with sleek walnut accents – reminiscent of what you’d see on a boat, Davis notes – applied in a slatted pattern to reveal shadow lines. Deep white cabinets keep clutter at bay, while the walnut shelves allow the couple to display their collection of cake stands and stemware. 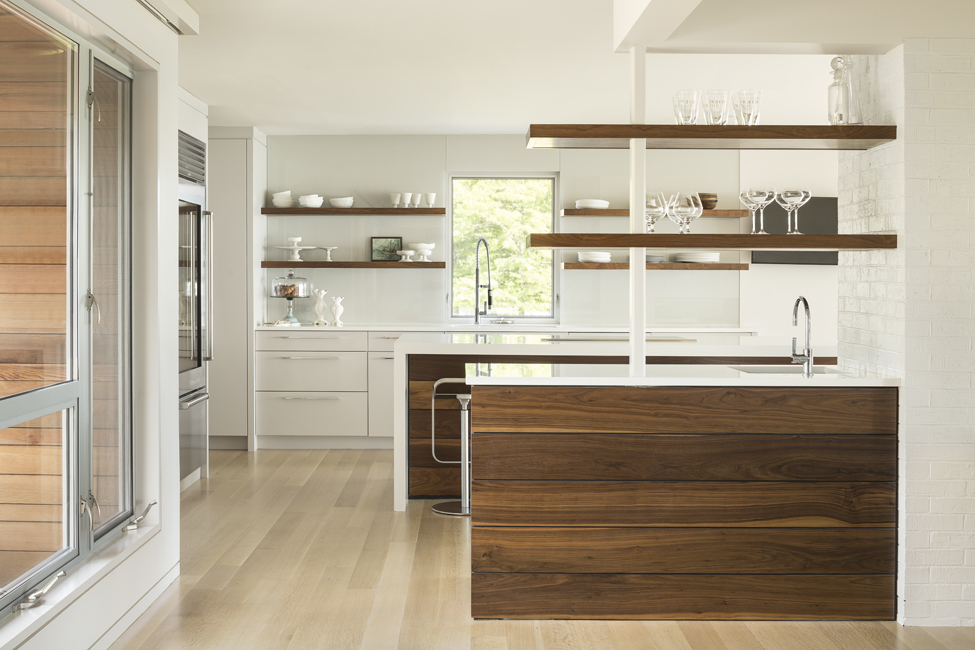 Facing the kitchen is a large dining area, where a group of pendants in different sizes and shapes hover over a long wooden table. “The whole space was designed to be open, so it was inherently airy,” Davis says of the section, which leads to the deck. 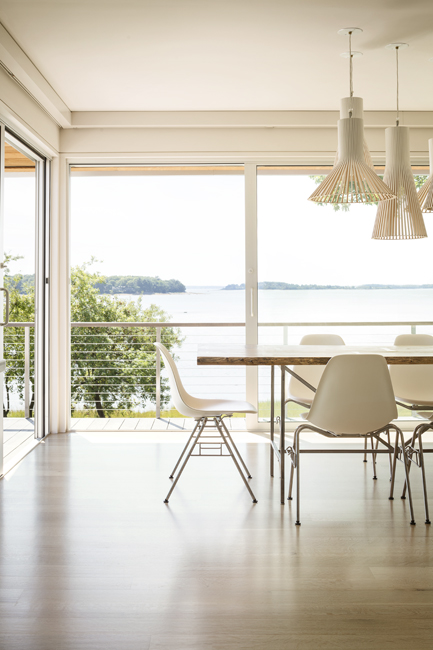 The same can be said of the living room, which they sparsely furnished with a locally made driftwood table, a sea foam-colored couch, and a pair of Risom-style lounge chairs. No photos or art are visible, and the tall, slanted ceilings seem to reach to the sky. Like the dining area, its dramatic views of the water provide all the character necessary. 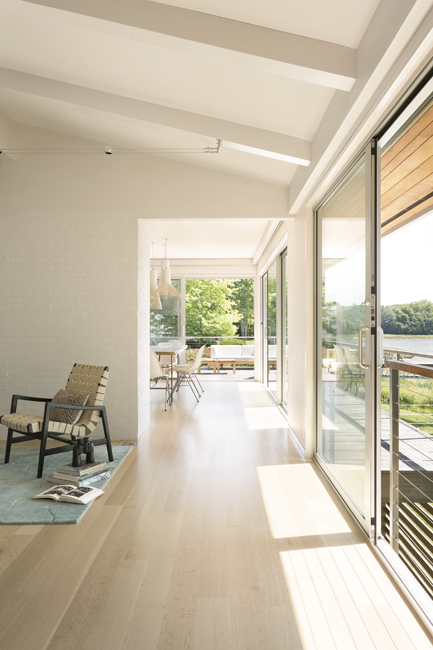 “We didn’t want furniture that would block the views or create conflict with them,” Davis says. Nor did they want to distract with color.

“This was a unique opportunity for a full house renovation because it was so broken up,” Davis continues. “The views should have been more a part of the living environment, and they just weren’t.” 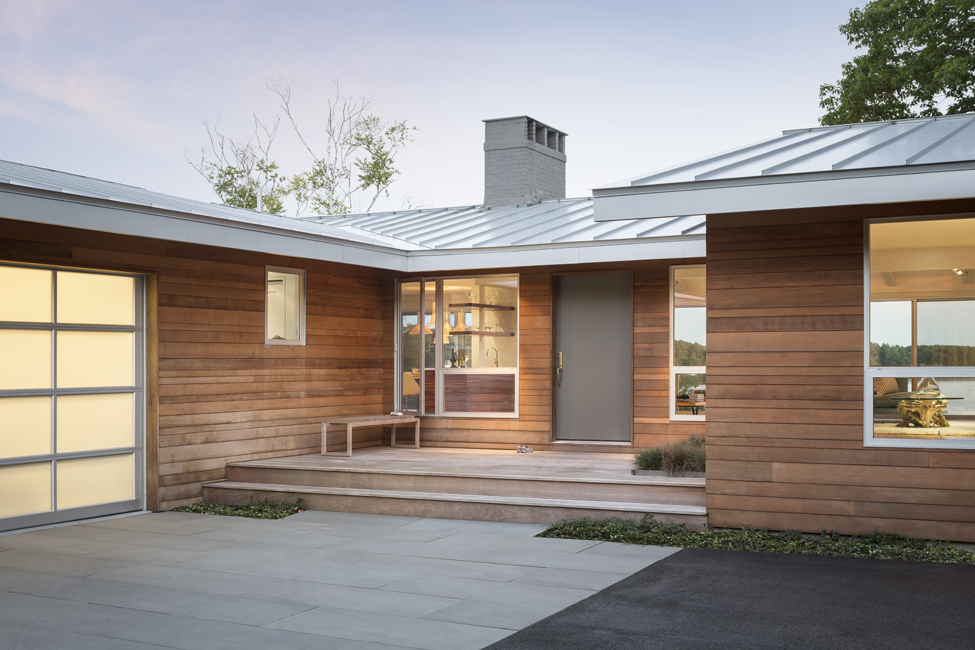 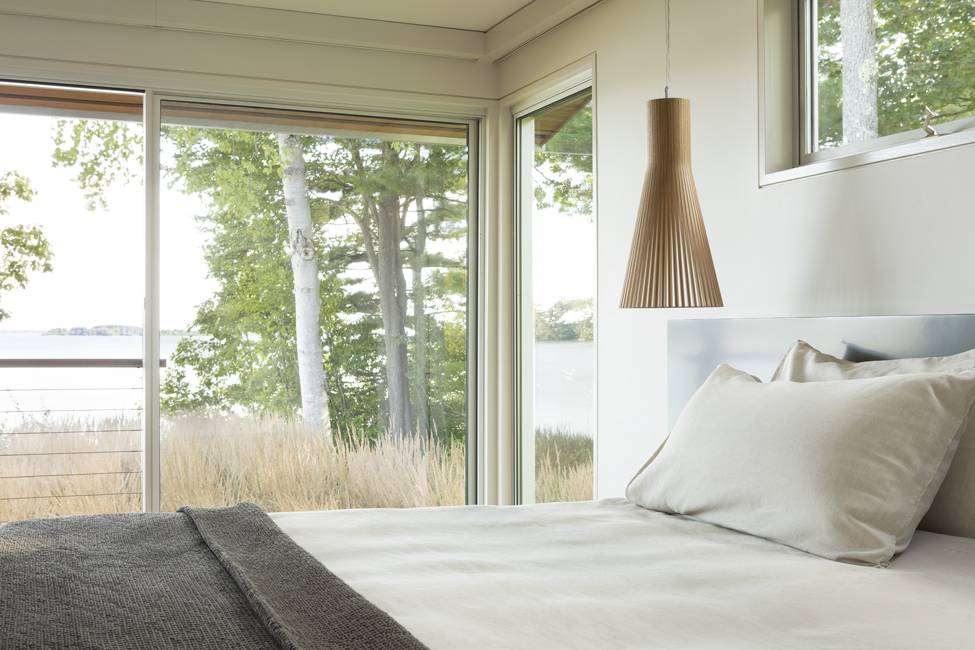 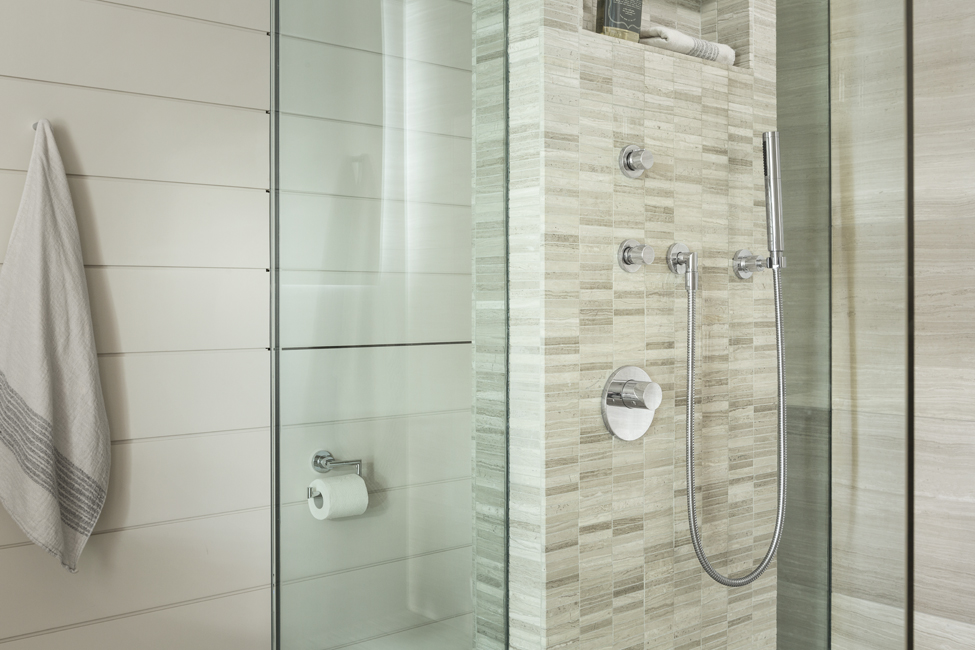 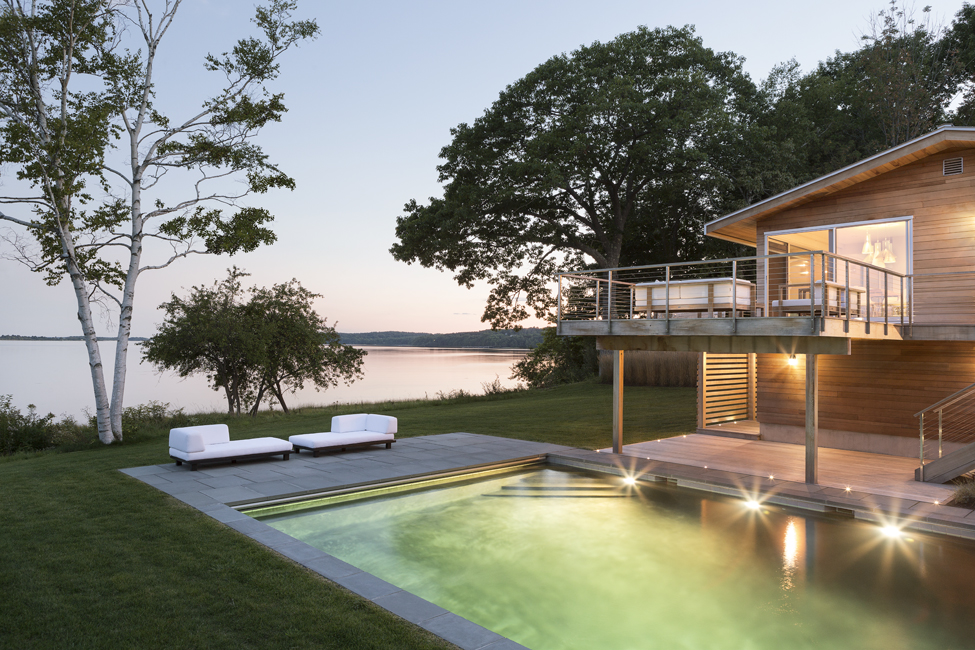 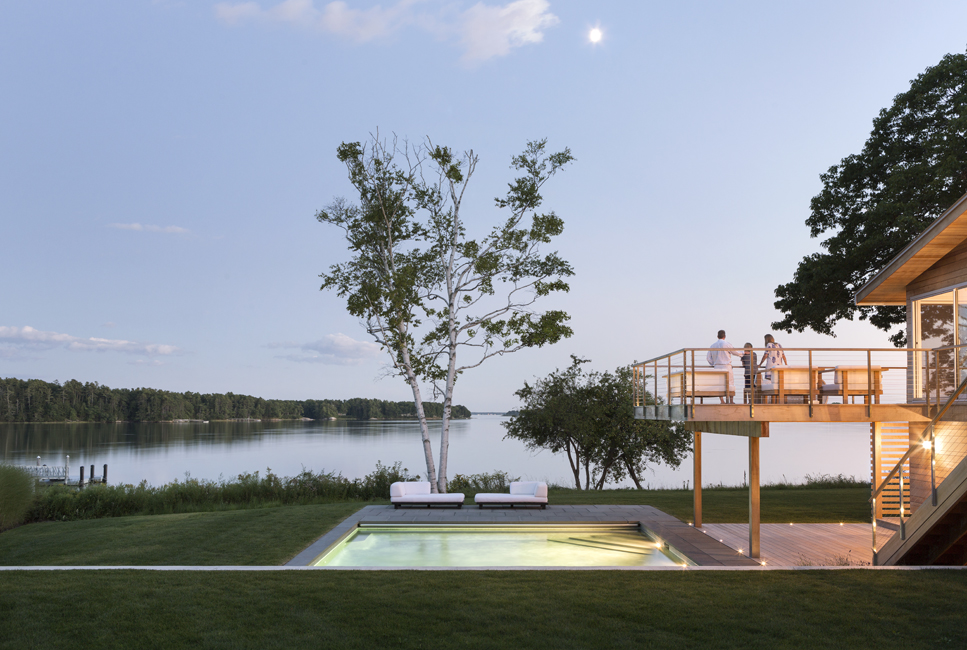 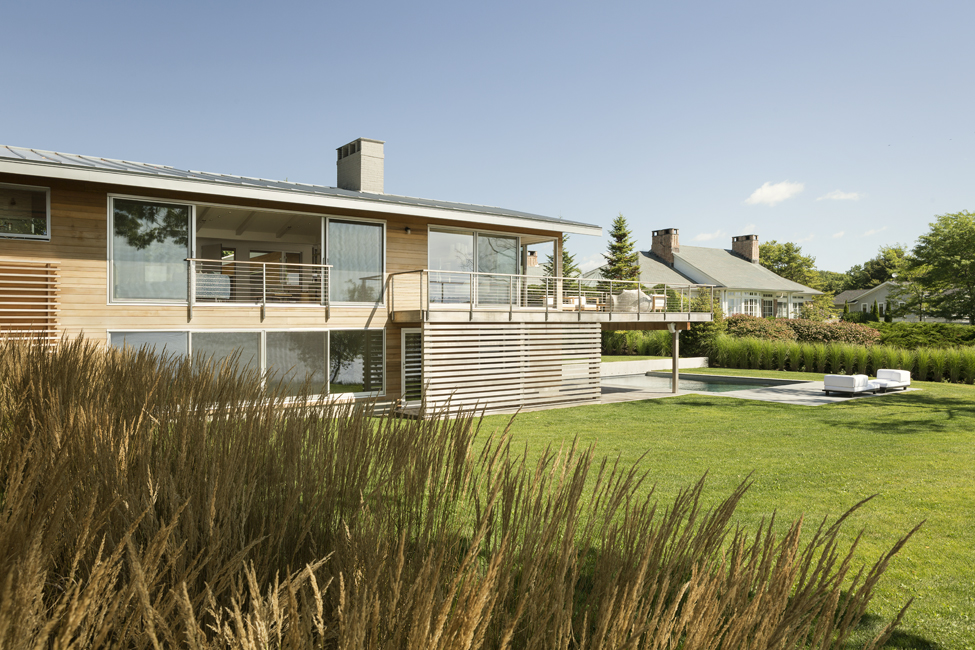 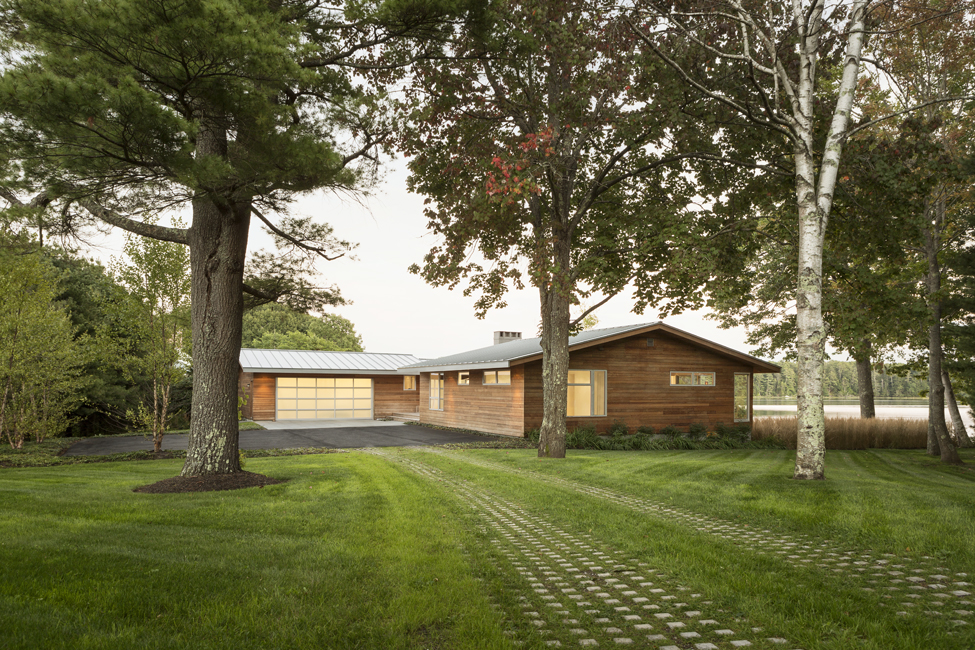 Inspired by Davis’ design? Here’s how to achieve a similar look in your own home.

Borrow from your environment
Because the home is near water, Davis selected muted blues and natural materials to make it feel as though the environment is seamlessly interacting with the interior.

Don’t overhaul it
Reworking the concept of a home is perfectly fine, but strive to keep its integrity, Davis advises.

Hire the pros
“Spend the time and money up front to get professional assistance,” says Davis. “There’s so much value that our trades bring to projects that you, as a do-it-yourselfer, may not be aware of.”

Mix it up
“A combination of styles just feels fresh,” Davis says. “Here, we incorporated contemporary with a bit of ’70s style.”